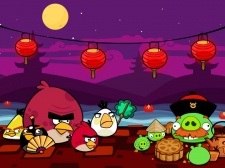 The artist claims that by unlawfully selling her designs, Hartz has robbed her of millions of dollars worth of royalty fees.

The complaint, which was filed on 4 August, also alleges that Hartz never actually purchased the intellectual property rights to the Angry Birds toy line before it entered into a separate agreement with Rovio, calling the legality of the deal into questiion.

Years before Angry Birds became a globally recognised mobile game, Adams was approached by Hartz and asked if she would be able to design a new line of toys aimed specifically at pets.

“When I was first approached, Hartz wanted me to have complete artistic freedom,” explained Adams, “I wanted to create a line of toys that looked a little roughed up by your cat.

"I wanted to create the idea that they were characters that knew they were going to be dragged around and were upset about it. ‘Angry Birds’ seemed like the perfect name.”

According to Adams, Hartz was extremely pleased with her designs, and the pair struck up an exclusive agreement stating that there would be "no transfer of ownership" of the Angry Birds IP from Adams to Hartz, meaning Hartz would have no right to license Adams' IP to third parties for its own profit.

“When I was flown off to the East Coast to meet with associates at Hartz, that’s when it started to feel real," revealed Adams, suggesting that the deal seemed too good to be true.

"They told me, ‘this is going to change your life', and It got me really excited. I was convinced it would turn things around for me.”

The relationship between Adams and Hartz quickly deteriorated following the launch of Angry Birds in 2009.

It's alleged that, after the game had started making waves, Hartz used Adam's intellectual property and her trademarked Angry Birds name to leverage a deal with Rovio. Such a move would have violated the company's agreement with Adams by using her IP despite not owning it.

It's suggested the firm now continues to sell Adams' Angry Birds pet toy line without any legal property rights, and, according to Adams, Hartz have told her that she can no longer use the name Angry Birds due to a conflict.

“Based on the international success of the Angry Birds video games, we believe that Hartz has made tens, if not hundreds of millions of dollars from sales of the Angry Birds pet toys,” said Anthony Shapiro, partner at Hagens Berman and one of the attorneys representing Adams.

Indeed, while Rovio has sought out trademarks in a variety of product arenas, including children's toys, clothing and cell phone accessories, the firm has yet to register a trademark for pet toys.

According to Adams that's because the trademark was registered to Hartz in 2007, following the firm's agreement with her.