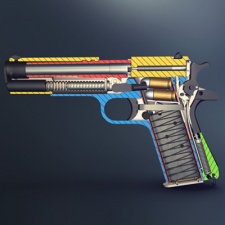 If making games wasn't hard enough, in recent weeks we seen a number of companies branching out into new business opportunities.

And now, Czech developer Madfinger Games, which is best known for its zombie shooter series Dead Trigger,  is getting in on the action.

The difference in its Monzo project is that it offers a virtual simulation of constructuring a working 3D model.

Thinking outside the virtual box

Simply put, you open up the app, buy a mechanical model such as motorbike, steam engine or gun in kit form, and then put the virtual 3D pieces together to make a working replica.

You can then customise with colour, take a photo of it and share on social media.

"The whole process takes gamers through the purchase and unpacking of kits to assembly, painting, exploring and sharing of finished models on Facebook and other social media" explains Madfinger CEO Marek Rabas.

"Monzo has great potential to capture the interest of mobile gaming fans from all present genres and it will also be fun for gamers of all ages as well."

You can see how the process works in the following video.

Monzo will be available soon for Android and iOS devices.