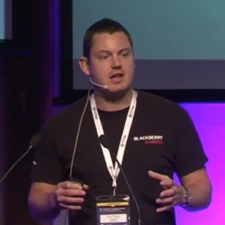 Don Turner is a Developer Evangelist for BlackBerry. He helps developers create innovative, elegant apps and games for the BlackBerry 10 platform. Don is a lively, passionate speaker and you'll find him at events all over Europe. He has a particular love for coding live on stage and the unexpected (and frequently humorous) results that follow.

Making games is hard, there's no doubt about it. It's a job that requires buckets of passion, creativity, dedication, while actually turning a great concept into a great game requires an ungodly amount of man-hours.

To say that it'd be disappointing to devote your life to a game, only for it to come out and 'flop', would be an understatement.

Unfortunately, that's the situation many developers find themselves in. Why? Because, while creating a game is hard, getting your game discovered is ten times harder.

Fortunately, BlackBerry's Don Turner was on hand at PG Connects Helsinki 2014 to explain what developers can do to give themselves a real fighting chance.

"You've come up with an amazing game idea, you've been working on it for months, you're pretty sure it's going to rock the world, and it's definitely going to go completely viral," opened Turner, revealing why every dev thinks their game will be the next big thing.

"Your team are also exhausted. They've got the audio perfect, they've got the gameplay bang on, and the graphics are amazing. You're all positive that your app is going to be a worldwide success."

However, reality, much like the app stores that developers put so much faith, takes no prisoners.

"The reason your game is likely to fail is because no one knows about it, and that's because when you publish on any of the major app stores, you're entering some of the most competitive markets on earth," explained Turner.

"On iTunes alone there are roughly 90 games published every single day, which means there are hundred of game developers in exactly the same position as you."

"All of their hopes and dreams are also pinned on that one game."

No, it's about educating yourself, and learning how to take control when fate deals you a disastrous hand.

"That's why it's important to remember that app stores are brilliant for distribution, but they are terrible for discovery," said Turner.

"The most important thing you need to do when you're getting your game discovered is to build relationships with players to create evangelists.

"If you're only going to do one thing, it has to be this: build a great game, and then engage with your players."

You can see all the video presentation from Pocket Gamer Connects Helsinki 2014 here.

BlackBerry: App stores are great for distribution, but terrible for discovery