Microsoft man on the advantages of wearing another hat 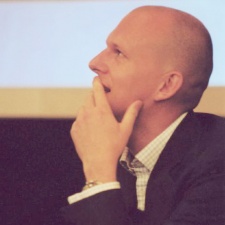 “I won't be talking about this amazing and exciting deal for the purposes of this presentation,” said Microsoft's corporate VP Phil Harrison of the American giant's move for Minecraft developer Mojang near the start of his talk at DICE Europe in Kensington, London.

“The deal actually hasn't closed yet, so it's not appropriate for me to talk about it here.”

Minecraft had been raised, however, as an example of a “primitive construct enjoyed by millions of people around the world”.

But the prime contender Harrison wanted to talk about – an example of simplicity of focus but complexity of design that all developers can learn from – was an even bigger worldwide phenomenon. Kinder Surprise.

“The creativity that goes into that little capsule is extraordinary,” detailed Harrison. “The Kinder Egg team delivers hundreds and hundreds of SKUs every year. It's kind of mind boggling.”

Videos of Kinder Eggs being opened – the chocolate amusingly discarded for the toy inside – have become a massive, massive hit on YouTube, Harrison contended. One video showed during the presentation had 129 million views alone. The playlist it was a part of? 664 million views.

The Kinder Egg team delivers hundreds and hundreds of SKUs every year.

That out-of-the-box but focused kind of thinking is something Microsoft's UK studios try to deploy in two-day long creative jams, Harrison said.

Lionhead, Lift London, Rare and Microsoft's Soho studio all run one creative jam a year, with the projects that result taking the form of things that amuse to potential commercial smashes.

“We allow our teams to self organise to any macro or micro team they want. We give them days off to go off and create anything they like – no rules, no budget, they can do anything they like. And then they present back in front of the whole studio,” added Harrison.

Not just focusing on games, some of the projects have either gone on to be, as Harrison puts it, “productised”, while others – as he showcased – have been taken into incubation in the attempt to shape them into a commercially viable entity.

One such project was Ink Quest from Lionhead, which Harrison described as a “very creative re-imagining about what it would be like to have an interactive book if you could actually play with the words and the narrative.”

In the end, work on Ink Quest came to a halt in July 2014, though Microsoft intends to make it available as a free download – a gift to the community, if you like.

Other projects that have been created include everything from Parkhorse – It's Horsome from Rare – a bizarre combination of horse racing and Parkour and an Xbox One app – Xbox Awesome – that tasks users with rating funny pictures of cats lifted from the internet in a Tinder style manner.

“We learned that creative jams are inspiring and wonderful,” summed up Harrison.

Some [of the games] are deeply inappropriate and should never be seen in public.

“They are the most creative window into the mind and they help new talent – talent you might not have spotted before within a studio emerge. We really embrace this idea of rapid prototyping – getting to the fun fast – and not being weighed down by production values. It helps build new disciplines – artists become coders, for example – and it's about getting people out of their comfort zone.

“Some [of the games] are deeply inappropriate and should never be seen in public. Lionhead had a few of those,” Harrison added, to laughter.

“But it's about taking off the hat that you wear for your normal job and put on a different hat. Frankly some people struggled with no boundaries, and we had some teams who decided to go and boil the ocean and, a day in, they'd discover they were nowhere near boiling the ocean and they'd have to scale back, but that in itself is a useful experience.”

Monument Valley designer: Games must "escape the trope of violence"

Nexon: Working in games is like running a restaurant, and now's the time for your cuisine to go global

Where the big boys go to play: 3 big lessons from DICE Europe 2014