The craziest contraption since the Nintendo Power Glove takes to Kickstarter 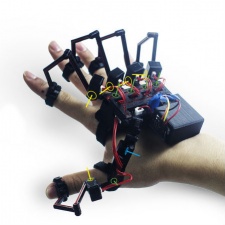 Visualisation and gestural input are becoming as big a topic for virtual reality as head-mounted displays, but the Dexmo is the first time we've seen someone attempting to build touch and tactile feedback into VR.

The device from Chinese outfit Dexta Robotics will attach to the back of your hands and each finger, creating a kind of skeletal glove.

This scary-looking hand exoskeleton will come in two flavours as it works to put the 'real' in virtual reality.

The Dexmo Classic is purely a visualisation and input device, which monitors your hand and finger movements and sends the data into a virtual reality environment.

The Dexmo F2 is its bigger brother, and includes force feedback that adds resistance to the exoskeleton in the right positions, with the correct pressure, and at the collision detection to simulate the sensation of touching a digital object being viewed in the HMD.

Both are also demonstrated as robotics controllers, with mechanical handsmimicking the user's hand movements while feeding force feedback data so you can feel what the robot is touching. Bomb disposal is one application the designer suggests it could be useful for, which is a fascinating idea for virtual reality uses.

A Kickstarter campaign has just launched in an effort to raise the $200,000 needed to further develop the Dexmo models, and is currently running at over $45,000 with 25 days to go.