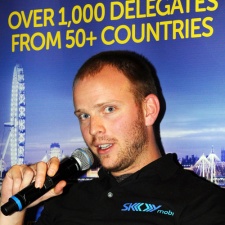 How do you get customers, and how do you make money?

Those were the tough questions being asked at our latest Mobile Mixer - powered by SkyMobi - which took place at the Back Up bar in the heart of Paris during Game Connection Europe 2014.

Tackling them head on was our panel of industry experts, who, it'd be fair to say, didn't always see eye-to-eye.

Speaking up first was Gamesbrief's Nicholas Lovell, who believes the best way to find users is to work your way up the charts.

Naturally, the easiest way to do that, is to create something that captivates your audience.

“You also can do that by having two massive licenses, or you can do that by cultivating traffic, using your contacts to get some traffic and ride up the charts.

"Ultimately though, don't buy your way up the charts. Earn your way up."

Taking Lovell's argument and flipping it on its head was Critical Force Entertainment's Vlad Micu.

According to Micu, developers need to stop chasing the likes of Apple and Google and start spending more time with the people that matter: the fans.

“Advertising doesn't work for us. Getting a print, or an ad, doesn't work. Events aren't even worth it. Make a game that focuses on your communities. We make first person shooters, we build communities,” said Micu.

“Fostering a community, developing competitive play, that works. You need multiplayer for that, which makes us incredibly rare. That's my opinion.”

Indeed, Micu explained that developer shouldn't compromise their vision or waste too much money for the sake of climbing the charts. It's about creating a game that you, and your fans can be so passionate about that they are willing to spread the word for you.

“As a developer of a niche product I shouldn't be distracted with the pain of reaching and paying lots of money on user acquisition to remain in the top 100 charts. I want to be as independent as possible from needing the charts to drive downloads in the first place," added Micu.

“I don't like having the need to chase, court and constantly please platforms such as Apple and Google for a little bit of extra attention, I want my players to come to my game because they like it and want to tell their friends about it.

"As an independent mobile game developer, I should aim to have such a high quality product that people want to share with each other and allows me to do everything in my own power to avoid any dependency to the platform my games are featured on.

“Aside from that, I don't believe that most publishers are equipped to deal with my game as well as I can myself. Once you put an extra layer of communication between you and your players, your response to your most valuable asset, your community, will just move slower than it should.

According to SkyMobi's William Heathershaw and ZQGame's John Hwang, if you're looking to break into Asia, you must start thinking outside of the box.

Making friends in the East, and dabbling in cross-promotion wouldn't hurt your chances either.

"You can have a great marketing strategy, and that's quite efffective. Publishers are a great way to go if you want to be noticed," said Heathershaw.

"Think outside the box. Ask yourself: how different can you make your game? Don't make it controversial though, because something controversial won't fly."

"Cross-promotion is absolutely key," added Hwang. "We're trying to use videos to cross-promote our games. We designed the user experience to maximise the fun in five minutes to maximise retention."

Go your own way

Ultimately, the key thing to take away from our panel is that there isn't a one-size-fits-all'form of user acquisition.

Every single developer should strive to make money, and build a user base, in a way that feels right to them.

Look at what the competition are doing, for sure, but don't feel compelled to chance how you do things because of someone else's success.

You need to use techniques that complement your vision.

“In the end though, there will come a point where you need to invest to maintain that. We're looking at interesting an innovative ways to do that.”

You can see all the photos from the Mobile Mixer on our Facebook page.

And the photos from our Guys and Dolls-themed Roaring Twenties party - sponsored by ZQGame - here.

Thanks to our sponsors SkyMobi and Cashplay, and our fantastic panelists William Heathershaw, John Hwang, Vlad Micu, Nicholas Lovell, and Steve Stopps.