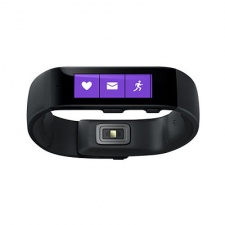 There have been plenty of rumours about Microsoft and the wearables: after all it was never going to let the likes of Apple and Google steal a match in such a potentially significant market.

Yet given the very large install bases of mobiles OSes such as iOS and Android compared to Windows Phone, Microsoft has been forced into a more strategic strategy when it comes to the just-announced $200 Microsoft Band.

In terms of form factor, its closest rival appears to be Samsung's Gear Fit, although the Microsoft Band is a more compact unit, with an elongated 1.2-inch touchscreen that's populated with up to 12 screens full of customisable tiles.

It's also more advanced than other bands in terms of offering smartwatch-style features such as built-in GPS along with continual heart rate monitoring.

"Over all, I found the device worked well, the app was easy to navigate, and the constant heart-rate monitoring was a novelty that was hard to ignore," says The New York Times' Molly Wood, who's been testing the Band.

"It’s extremely fitness-oriented, but I found that generally inspiring."

As well as fitness, the other, more general, use case for Band is how it acts as a messaging notification center.

One wearable to rule them all

The most interesting decision, however, is Microsoft's cross-platform approach.

Given the small number of Window Phone users, the Band is just as happy to pair up with Android and iOS smartphones as it is with a Windows Phone, with the only additional benefit being voice control via Cortana if it should happen to be hooked up to a Microsoft smartphone. Notifications are also cross-platform.

The supporting own health app is available across the board, and Band is compatible with RunKeeper and MyFitnessPal.

Built-in workout routines from a host of expert sources (and more from within Microsoft) can be downloaded to the Band, which then delivers notifications to guide you through various exercises whether it's synced with a phone or not.

This is a particularly interesting feature, as it's a way to get major fitness brands interested in the Band and turn them into advocates and ambassadors.

More generally, 10 sensors - including a UV sensor - are shoehorned into the Band, with onboard GPS giving runners (in particular) the appealing option of heading out without having to carry a paired smartphone.

The data it collects, which includes sleep data if you should want it, is then synced to the cloud - or a third-party app - where it can be put to any purpose you desire.

General buzz around the social networks seems as favourable as the professional reviews, with more than a few early adopters plesantly surprised by the device's ergonomic and intuitive operation. "It far exceeds my expectations," says one Reddit reviewer.

These flexible features are topped off with a two-day battery life. It's not a particularly long time, but it's still double the life that a lot of touchscreen-equipped wearables are currently managing.

So, judging by the early reactions, Microsoft's Band is a contender, although with the wearables market in such an early stage, what will be more important are the company's wider plans for the platform, especially as more Android Wear and Apple Watch devices hit the market.

Microsoft Band was available in the US, but is currently sold out.