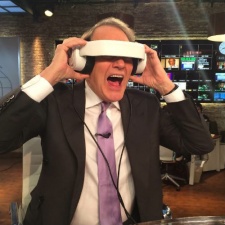 November 13th, 2014 - 10:30am
By Spanner Spencer
The Glyph is one of the more unusual virtual reality prototypes out there, but that didn't stop it from bringing in more than six times its Kickstarter goal in February 2014.

Since then its developer Avegant has been seeking more traditional funds from venture capitalists, and just landed an additional $9.37 million in a Series A round lead by Intel.

"This is a landmark time in Avegant's growth profile," says CEO Joerg Tewes. "Funds from this round will help carry Avegant through its manufacturing milestones and solidify our delivery commitments. I couldn't be more excited in the future of Avegant and the near-eye display industry."

The Glyph pitches itself as the ultimate personal theatre. In its natural state it looks like fairly standard, if chunky, over-the-ear headphones. Flip the wide headband down over your eyes, however, and it transforms into a virtual reality HMD.

It began life as a military concept, as the Glyph boasts a unique approach to display technology that's already in use on gunships and jet fighters. Rather than the usual twin, side-by-side LCD screens, the Glyph takes a decidedly sci-fi approach and projects its images directly onto your retinas.

The crowd went nuts for the concept on Kickstarter, and that enthusiasm has evidently spilled over into the corporate sector. Intel took point on a new round of Series A funding that brought in almost $10 million more to allow the platform to come to life.

"Fueled by investments in innovation, the wearables space continues to flourish and grow," adds Mike Bell, corporate vice president and general manager of the New Devices Group at Intel. "Today's investments in some of the most innovative companies in the space signal the excitement and momentum in wearable technology."

Instant Games - The Good, the Bad and the Future