The greyhound for game creation 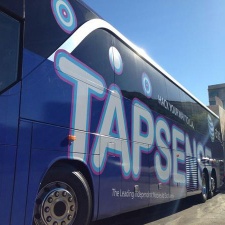 This wasn't just a sightseeing vacation, though. It was Day One of TapSense's 2014 Hacker Bus hackathon, a mobile game-themed codefest on wheels organized by the mobile ad exchange company.

Sponsors included AT&T, Nvidia, Women Who Code, and Pocket Gamer, with representatives from each company attending as judges for the hackathon creations.

These games were judged on the criteria of functionality, originality, and entertainment value. Bonus points were awarded for games including easily monetizable mechanics.

First place and winner of the $10,000 in ad spend went to Game of Suits by Amar Chitimalli, a turn-based match-3 game inspired by elements of poker.

Finally, third place went to Platonic Solids Experience by @Yosun, an augmented reality game that lets users interact with the various platonic solids, projected three dimensionally with the help of a piece of "magical" graph paper.

The hackathon itself lasted through GDC Next 2014, which its 35 participants were free to attend, and ended on the evening of 5 November after the Hacker Bus had arrived back in San Francisco.

"It was a huge success and everyone had a good time. The quality of the output far exceeded our expectations," said Gregory Kennedy, TapSense's SVP, Marketing.

"We are planning to do something bigger and even more ambitious in 2015. We're not ready to announce it quite yet - stay tuned."

For more images of the Hacker Bus hackathon, check out TapSense's blog post documenting the event day by day.