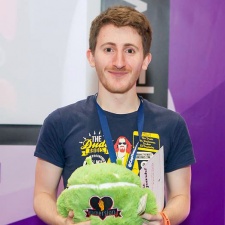 The Big Indie Pitch returned to London for Apps World Europe 2014, proving quite the treat for indie devs and journos alike.

Apps World's floor was swarming with all manner of enthusiastic indies, making for some fierce competition.

Every and any genre you could think of had some representation, many of which had taken different paths to reach the Big Indie Pitch.

While some games had been coded for Unity, others in HTML5 for compatibility; even Adobe Air was represented in a few cases.

Many thanks to our sponsors Immersion for guaranteeing a fantastic atmosphere as well as some lovely swag for folks who came along.

Fluff Stuff Studios' Polyganic took the limelight and snagged the top prize with its DOS-tastic spirit and neo-Flappy Bird gameplay.

Trailing ever so slightly behind in second place was hep to the jive rhythm game Planet Quest from outofthebit.

It was a very close competition for the final two, but in the end Fluff Stuff Studios walked away with their head held high and a promotional package that'll push Polyganic across the Steel Media network.

Of course, the top three were very happy to accept their fuzzy Andy the Android plush prize, which'll keep them cosy through the cold winter months.

Remember to have a gander at our Apps World Europe 2014 Big Indie Pitch gallery over on our Facebook page, and tag yourself if you were there.

We look forward to seeing you all again at the next Big Indie Pitch - good luck!