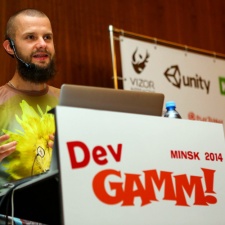 On 17-18 October, Minsk played host to the DevGAMM Minsk 2014 conference for the first time. Tickets had been completely sold out two weeks before the event, and instead of the declared 800 participants the Renaissance Minsk Hotel managed to fit 1,000 people from 22 countries.

DevGAMM Minsk 2014 featured more than 50 excellent reports on game development and promotion, game design, technical components, art, sound, screenwriting and legal aspects. Speakers were eager to answer all the questions from the participants, even after their speeches were over.

All presentations, including the most interesting ones from Mike Rose and Maxim Hryniv, are available on the official YouTube channel of the conference.

GAMM:Play, a traditional game showcase took place in two separate halls this time and was a huge success. 61 games were presented during the event, and due to the support of Wargaming company every developer gained valuable feedback from Sergey Galyonkin.

Opportunistic developers also jumped at a chance to show their games to different publishing companies at Speed Game Dating, and publishers noted that there were more quality projects his time.

Spice Recruitment was in charge of Vacancy Wall at Minsk conference. Pretty girls were attracting the attention of confused applicants with chocolates and valuable advice. Every participant was able to find his or her dream job right there.

Organizers try to bring something new to the conference every DevGAMM. This time the Business Lounge was introduced where every business participant was able to relax, discuss work opportunities with partners and have a drink.

DevGAMM Minsk 2014 hosted 3 wonderful parties, which gave participants the opportunity to get to know each other, find new friends and partners or even job offers.

PocketGamer, SkyMobi, Vizor Interactive and Renatus which were responsible for the parties, managed to create very informal atmosphere so that networking could be more productive.

Game Lynch left the unforgettable impression on every attendee.The new format made this show a nice mixture of humor, criticism and light alcohol inebriation. The audience was the fairest judge, that is why a cocktail, mixed of all the ingredients found on the table, was tried both by the developers and gaming experts.

DevGAMM Awards appeared to be the conference biggest finale. All attendees were touched by the reaction of the developers when the winners were announced. This ceremony again showed how heartwarming DevGAMM could be.

Best Indie Game (sponsored by tinyBuild GAMES)
Game: I was on the Throne
Developer: Disco Fish

DevGAMM Team expressed their gratitude to Vizor Interactive, Unity and Kefir companies, to the organizer Renatus, each sponsor, speaker and every attendee for all the help and support.

Next DevGAMM is going to take place in Moscow, on May 15-16, at Radisson Slavyanskaya Hotel.