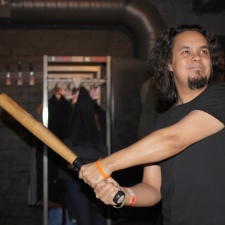 Acting as a pre-Slush 2014 event earlier this week, a bevy of hopeful indie developers gathered in On The Rocks, Helsinki, for one of our world famous Big Indie Pitches - sponsored by the new mobile gaming social SDK GetSocial.

The night was one of the final few BIPs before our Very Big Indie Pitch at Pocket Gamer Connects in London this January. You can registered for that right here.

The quality of the titles pitched was - as always - extremely high, and from a range of game genres spanning from colourful puzzlers, to innovative auto-runners, to smashing gallery shooters.

But there could only be three winners of our advertising spend prizes, and they were...

A whipsmart modern mobile take on the likes of Counter-Strike and Call of Duty, the developer Critical Force showed the next version of its online multiplayer shooter franchise running super silky smooth on two Nvidia Shields, though was quick to note that the game will also be available on standard Android and iOS devices too.

Having first seeing this impressive solo effort by Glad Game Studio at Pocket Gamer Connects Helsinki 2014, we've had our eye on FallMan for a long while now.

Its simple but surprisingly deep trampoline bouncing gameplay (!!!), combined with clean but personality-filled art won over the panel on the night, netting it the second place prize.

Despite being based in the UK, the Calvino Noir team came over to Helsinki to show off their dark and stylish point-and-click stealth action game, which is crossed with a neo noir aesthetic.

Though this amalgam of styles probably won't appeal to the Candy Crush crowd, its unique look, effortlessly cool story, and episodic structure, certainly snagged the attention of our judges.

Thanks again to all those that pitched at the event. You can see the photos on our Facebook page.

And also many thanks to our judges: