Across the great divide 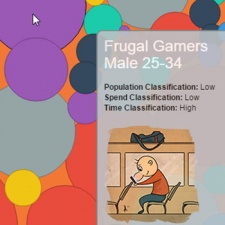 They may sound diametrically opposed, but a new study from Insights Meta has revealed an unexpected relationship between free-to-play and paid game audiences.

The study was designed to provide a deeper explanation of the motivations, expectations and behaviours of a free-to-play audience in the hope of providing insights into the development and monetisation of F2P games.

Out of these seven, it seems that the top three segments willing to spend money on F2P games are mobile core, digital natives and frugal gamers.

However, it would seem that F2P audiences aren't that different to the traditional paid market after all. Insights Meta discovered that three out of four gamers are happy to play both F2P and paid titles.

The study also revealed that only ten percent of P2P fans will go out of their way to avoid F2P experiences.

"Since they're the same players in many cases, you're competing for the time spent playing other games. That's a big hurdle to overcome," said the founder and CEO of Insights Meta, Jason Anderson.

"Free-to-play games generally require a bigger audience to drive revenues since not everyone spends money. So, time spent playing pay-to-play games can negatively impact the size of the free-to-play market and vice versa."

To read the full report yourself, the study is available here.

There's also a snazzy interactive infographic with a more visual representation of the findings.

The number of women playing games continues to rise