Running in US and globally until January 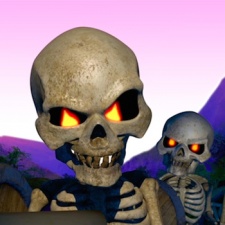 While Supercell and King have previously spent big on TV ad campaigns, it's Machine Zone's rumoured $40 million glossy campaign for Game of War that appears to have focused everyone's attention on the phenomenon.

Heroes Charge developer uCool has announced a cable TV campaign for the RPG that will cover 25 countries, including channels such as Comedy Central, Adult Swim, SpikeTV, FX, and ESPN, targetting the game's 18-44 year old demographic.

The commercials will air from 20 December through 23 January in the US and run throughout January globally.

UCool hasn't put a price on the campaign, but says it will be spending "tens of millions of dollars".

Reaching out to noobs

"Heroes Charge has been on a tear since we officially launched weeks ago and has been rapidly climbing the charts. We're now #1 in 120 countries with over 6 million downloads and over 160,000 player reviews," said producer Jim Ngui.

In conjunction with the ads, uCool will be releasing Heroes Charge's December update, including: a level cap raise from L80 to L90; the Grand Arena, which can handle 15v15 PvP battles; and three new hero characters.

Given improvements in ad tracking, spending a lot of money on TV campaigns for your game can be a sensible move for the very biggest games, but generally it's only thought to be sensible if companies have already saturated all their traditional user acquisition channels.

Certainly, it will be interesting to see if Machine Zone and uCool's aggressive campaigns are continued in 2015, and if any other companies decide to step up and compete with these deep pockets.

How Heroes Charge charged up the top grossing charts in Germany, Russia, Korea and the US