One half Android, one half surprise 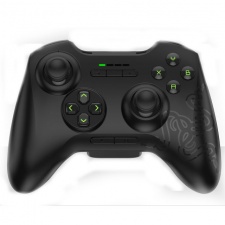 Unveiled by Razer at the Consumer Electronics Show in Las Vegas, the Forge TV streaming media box is one of the first devices to run Google’s Android TV operating system.

The Android micro-console was first introduced to us at Google IO back in June 2014, but amid the frenzy of interest in Android Lollipop and Google Cardboard we learned little about it – not even a name.

Now Razer has chosen CES to truly pull the cloak, announcing that the Forge TV will retail in the US for $99.99.

It will primarily be a tool for playing mobile games on the big screen, and will do so through Google Cast. The beta service claims to allow users to beam content from Android and iOS devices straight to the Forge TV.

Away from gaming, Razer’s box will also leverage Google Play to host entertainment apps like Hulu, YouTube and Crackle (though Netflix and Amazon Instant Video are still unconfirmed.)

Under the hood the micro-console is built around the Snapdragon 805 chipset, featuring an ARM-based 2.5 GHz quad-core Krait 450 CPU, an Adreno 420 GPU, 2GB of RAM, and 16GB of storage.

Announced alongside the console were two new peripherals.

First is the Razer Serval Bluetooth 3.0 controller that channels the essence of the Xbox 360 pad. While the Serval will retail at launch for $79,99, $129.99 will buy you the Razer Turret.

The Razer Turret is a gaming mouse and keyboard designed for use on your lap.

The company claims that the keyboard will last up to four months on a single charge, while the accompanying 3500DPI laser mouse has stamina of 40 hours.

One console to rule them all

It means that gamers can now enjoy not just a console-based mobile gaming experience on their TVs, but a PC one.

Those wishing to stream games from their PCs to their living room will do so through the Razer Cortex: Stream, which will apparently work with any Android-based microconsole for $39.99.

Razer has muscled its way into that game-streaming membership club where players like Nvidia and Valve currently sit. Streaming is fast becoming a key industry focus as companies target new screens and audiences, and Razer’s offering challenges the competition with its universal compatibility.

The Razer Forge TV and Razer Serval will both hit shelves in Q1 of 2015, while the Razer Turret will follow in Q2.