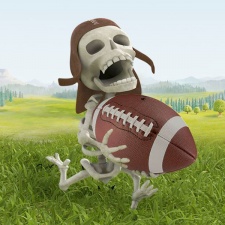 While online chatter has been buzzing over the abundance of mobile game ads at the 2015 Super Bowl, until now we’ve had no concrete figures working out whether the expensive commercials scored success for their makers.

A new blog courtesy of App Figures has shone light on whether forking out for a Super Bowl ad slot boosted app store rankings for Clash of Clans, Game of War and Heroes Charge.

Between them, it's estimated that the companies spent around $15 million.

Looking at downloads, Heroes Charge saw a huge spike in downloads just after the 2 February game time. It shot from around 260 in the free iOS game rankings to 86 following its Super Bowl ad placement.

However, in the general free iOS app rankings it was Game of War that pulled the most downloads of the three. The strategy title enjoyed significant success, actually overtaking Clash of Clans by a few slots in the charts.

Over on Android, Google Play saw less dramatic shifts in rankings, partly because of the different way that Google generates the charts.

Both Clash of Clans and Game of War remained steady, while Heroes Charge made the most dynamic move following the game.

Of course, the most important issue will be if the advertising results in higher revenue, but that's more of a longterm issue that's harder to see from app store charts.

To read the full report, head over to the App Figures blog.