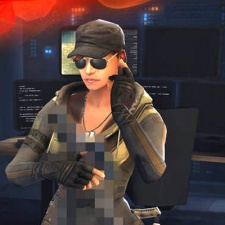 As originally reported on Pocket Gamer, it appears that the App Store censors have been at it again.

Over the past weeks, reports have been filtering through from developers that games and updates for games have been being rejected because of icons, screenshots and imagery which show in-game characters holding guns.

Guns shown on their own (i.e. without being held by human characters) can be displayed.

Given the popularity of firearms in games, this new restriction is clearly proving to be an issue for many developers.

A high profile casualty has been Warchest's shooter Tempo, which in terms of the screens it shows on the Ap Store, has been forced to pixelate weapons within the character administration screen.

Warchest hasn't commented on the situation, but one developer who has is Team Chaos, which has replaced a NES Zapper gun with a baseball bat in its icon for Rooster Teeth vs. Zombiens.

Elektron Games also had to change the icon for its game Tap Army.

There's some speculation that the reason behind the move is that Apple is enforcing a rule that metadata like screens and videos is available to all users on the App Store, all such content must meet the 4+ age rating.

Was Apple right to yank games using the Confederate Flag?