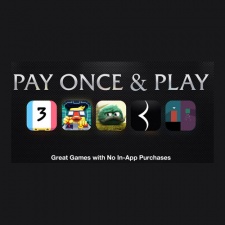 Following the success of Monument Valley, Apple is giving premium games another boost.

Despite free-to-play models form the mobile marketplace’s revenue, Apple has created a new featured slot in its App Store carousel that boasts “Great Games with No In-App Purchases.”

Apple of the eye

Click on the banner, and you’ll find a slew of “Pay Once & Play” titles.

Thrown in with paid app successes like Minecraft and Threes, a selection of 61 premium games are enjoying prominent shelf space.

The titles are varied, from budget $1 buys like Star Command and Pako, to pricey console ports like XCOM: Enemy Within for $13.

And ironically one of them is Space Marshalls, a shooter game that was recently caught up in Apple's decision to ban screenshots in which game characters hold guns.

The move gives greater prominence to the premium market on the App Store, and is another sign that Apple wants to develop greater interest in paid games; a sector which it thinks differentiates iOS devices over Android ones.

Apple analytics: 66.3 percent of all App Store software is freemium