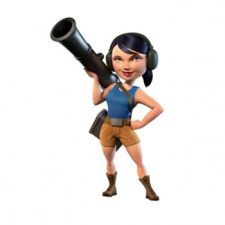 App Annie has released its first Games Index of 2015, an industry standard that charts the peaks and troughs of the top-performing games in the App Store and Google Play.

It reveals that Supercell enjoyed a particularly strong January, though this time it’s not Clash of Clans making the headlines.

It seems that Supercell’s strategy of forking out on national TV ads in the US is paying off, as it continues to invest in its burgeoning games portfolio.

Meanwhile, Tencent also broke into the iOS top 10 for both downloads and revenue with two new titles.

3D mobile shooter We Fire snatched the top two spot on the iOS charts by worldwide game downloads, narrowly pipped to the number one post by Trivia Crack.

Trivia Crack itself continued to snowball in app store popularity, rising four spots to finish in the top 10 on Google Play for worldwide game downloads.

Overall, however, in the top iOS and Google Play combined games charts there has been little movement at the top end.

data.ai: Roblox was the most searched game on the App Store in 2021