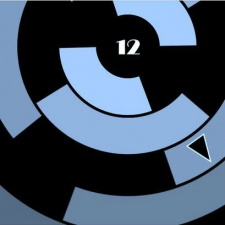 Psych may be a minimalist indie game, but its success has been anything but minimal. In just two weeks the dodge ‘em up has scored one million downloads on the App Store.

Developed in just six months, Psych is the brainchild of Christian Baumgartner, who has previously worked on projects with companies including Ubisoft. In 2014 he broke away to form his own one-man studio, jcsstranger, and the psychedelic challenger is his first result.

The game works by guiding a triangle across a jumble of concentric circles, tapping the screen to make it jump forward to the next ring and forming a bridge across safe segments.

Baumgartner decided to go down the free-to-play route, monetising with ad removal and the optional purchase of “skins” for the triangle, since he wanted to reach "as many players as possible."

While downloads have spiralled, Baumgartner told PocketGamer.biz that his initial focus was just to create a first solo project he could be proud of. His approach to user acquisition at the beginning was varied, as he "tried quite a few things, but without success."

"I contacted a lot of press, did some marketing via facebook Ads and Admob (with very low budget), had a devlog on Tigsource and tried to get involved on twitter as much as possible," he says. "Since that is not what I am good at it was never a key focus for me and so I wasn’t successful with it."

The game's big break came after being featured a total of 595 times on the App Store in 138 countries around the world. Baumgartner believes that part of the reason Psych stood out for feature was due to its design, as "The App Store is usually very colourful and I wanted my icon to differentiate from that trend.

"Once the icon is clicked, the player looks at two very clean screenshots in blue-ish tones that make you want to know how the mechanics behind them work."

Interestingly, the game has been far less popular on Google Play with less than 50,000 installs compared to the App Store's 1 million. Baumgartner believes this is largely to do with the App Store features drawing in players over the last two weeks.

"To be honest I was completely blown when the App Store feature kicked in and players started to flood the leaderboards," he admits. "I absolutely didn’t expect anything like that."

With the right attitude, indie game developers can still be successful on mobile