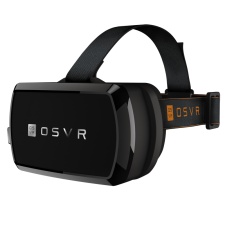 Razer's OSVR (Open Source Virtual Reality) headset has always been open to collaboration with other complementing technologies, as is shown by the 13 tactical partners it signed up back in February.

In keeping with this strategy, then, Razer has announced that it will be working with Leap Motion, the motion-detecting input tool, to create a version of the OSVR hardware which comes with hand-tracking sensors right out of the box.

We identified back in October 2014 that Leap Motion would be a shrewd partner for a VR firm, saying - "So why not buy the company," we wrote, "and build its sensing technology right into the Oculus Rift headset?"

Only now it appears that Razer has beaten Oculus to the punch.

While the Leap Motion sensor will remain an optional feature in the OSVR devkit, the firm told Engadget that there are big plans for further VR integration:

"Using your hands is not only the most natural method, it's also the most inuitive," said Leap Motion CEO and co-founder Michael Buckwald.

Pre-orders for the OSVR headset begin in May.