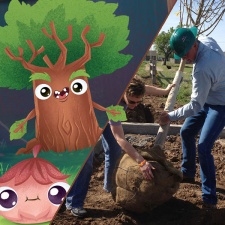 Their new venture, Zig Zag Zoom, has been founded with a core premise that time spent playing the company’s game should benefit charitable organisations around the world.

Zig Zag Zoom games - which use the company's mobiliz3 platform - turns the minutes players spend in game into a form of currency, which can then be spent on causes, such as re-planting trees after deforestation.

“It helps to think of it like an airline’s frequent flier program,” Kang told PocketGamer.biz at GDC 2015.

“The more you play a game, the more impact points you accrue. You can then spend those impact point on causes that are important you. It’s doing good, but we’re an entertainment-first company, so it’s also fun.”

For example, in our demo of Tree Story, cultivating and growing a virtual tree on your smartphone results in a real-world one being planted.

Over the course of a few days, you nurture a seedling into a fully flourished tree that you can then send off to a virtual forest.

Once you’ve done so, Zig Zag Zoom’s partners at the US Forest Service, Project Learning Trees, ACTrees, and the Arbor day Foundation will plant a real one for you – and keep you updated on its progress.

There are six other games in the pipeline with similar philanthropic twists, three of which are from third-party studios.

LA-based Zig Zag Zoom’s mission statement is to entertain, connect and empower players to do good – and that is certainly good business.

The company cited a Nielsen global survey that found 55 percent of respondents were more willing to pay more for products and services from companies that were committed to positive social and environmental impact.