It's an Apple Store app promotion 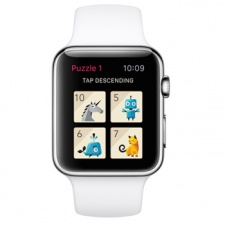 Thanks to the now opaque nature of delivery dates, no-one's questioning the popularity of Apple's pre-order campaign for its Watch.

There is, however, plenty of debate about the wrist-wrapper's usefulness as a gaming device.

Will it just be a glorified screen for annoying push notifications?

Perhaps, more importantly, what will be Apple's attitude to gaming and the Apple Watch?

Rap over the knuckles

Games haven't featured at all as part of its pre-launch advertising campaign and only a couple are listed on the Apple Store website which lists Watch apps.

However, one of these is now getting some official Apple love.

Rules!, a simple iPhone brain trainer from German developer TheCodingMonkeys, which will support Apple Watch with a stripped-down daily challenge mode, is being given away free via the Apple Store app for a limited time.

Obviously, the move is more about Apple encouraging and rewarding people for downloading the Apple Store app, but there is tacit approval for Rules! as a Apple Watch game.

As the official blurb states: "Download Rules! free*. Play it on your iPhone now and connect it later to your new App Watch.

PocketGamer.biz is keeping its eye on announced games which support Apple Watch with this handy list.