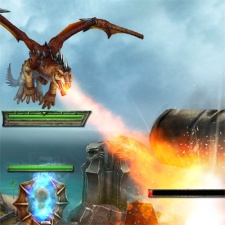 As one of the original wave of mobile social F2P developers San Francisco-based Pocket Gems has seen it and done it.

Starting with games like Tap Farm, it's worked its way through casual mobile gaming; an experience that on one hand has seen it come up with user-generated narrative platform Episode and on the other experimenting in midcore gaming with Epic Empire - a title investigated by our Monetizer.

And when it comes to the company's latest game - currently available in the US, UK, Australia, Canada, Ireland and New Zealand - it's the learnings from Epic Empire that provide the foundations.

Mixing combat, RPG-style customisation and breeding elements, the game offers over 70 kinds of dragons, each with a set of spells and rider class.

You also get to build your own island fortress, which you can attempt to defend from other players' dragons with ballistas and lightning towers.

Of course, there are also guilds and hardcore players will make their mark via the synchronous multiplayer modes which offer individual and team-based PvP.

"War Dragons represents the beginning of an entirely new chapter for Pocket Gems marked by deeper, richer games that will appeal to a new audience," said CTO and product lead Harlan Crystal.

"We're excited to share what we've built and plan to continue active development over the next several months to meaningfully evolve the game."