Google looks to standardise mobile VR around its Cardboard ecosystem 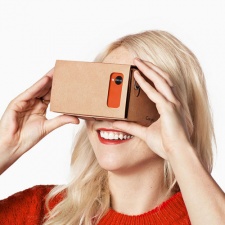 Given the amount of attention given to the likes of Occulus Rift and Project Morpheus - expensive systems which lack firm release dates - it's ironic that the VR equipment that's gaining market share is Google's Cardboard.

Launched at Google I/O 2014, it is as it sounds; a open source mount - typically made of cardboard but can be made from any material - so your smartphone can be attached to your face.

Of course, the clever bit isn't the mount, it's the software; that is how content developers generate a slightly different video stream for each eye, hence generating the virtual reality scene for you to view.

Yet Google is getting smart in terms of the hardware and the software ecosystem.

You can already buy dozens of different styles of mounts based on the Cardboard standard - or even download and build your own - and now Google is looking to standardise these with a new certification standard.

Called 'Works With Google Cardboard', this cover the physical mounts and more significantly the apps that you can discover via the Cardboard app.

The glue between the two is a QR code that will optimise the software for your specific viewer - something that some manufacturers have already been doing.

Google has also updated the Cardboard SDK - there's a separate SDK for Unity - with improved head-tracking and drift correction, and is providing software design guidelines and an updated SDK.

You can find out more via the Cardboard website.

10 million Google Cardboard VR viewers have been shipped since 2014