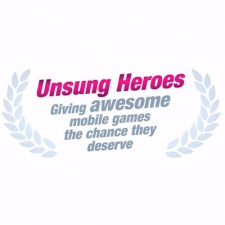 The concept is simple to understand.

There are plenty of good mobile games available, and lots of people playing mobile games, but connecting the two groups is the difficult bit.

With over 130 million active players on a monthly basis, Spil Games is sure it has the audience, so now it's looking for completed games to promote.

Indeed, it says that by just entering the competition, developers - especially those who submit their games early - will gain more attention for their games thanks to the open way in which Spil is running the Unsung Heroes process on its own sites and with Pocket Gamer.

It's decided to do this because an important element of the competition will be to persuade gamers to play a wider variety of games.

We're demonstrating our commitment to finding an audience for awesome mobile games.

As for the winner of Unsung Heroes, it will be formally published by Spil Games, gaining help in terms of marketing - for example, writing and optimizing app-store descriptions - as well as localisation and monetisation.

And there's also the small matter of $50,000 in terms of marketing and support.

"We had a huge response to Unsung Heroes when we launched it at Casual Connect in February," says Spil Games' new CEO Tung Nguyen-Khac.

"Developers really got what we were trying to do. With this competition, we're taking things to the next level and demonstrating our commitment to finding an audience for their awesome mobile games."

Developers can find full details at the Unsung Heroes' website.