Snail Games bringing its $400 Android gaming smartphone to US 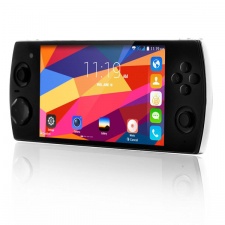 During E3 2015, the LA-based Snail Games USA - a subsidiary of the Chinese firm Snail Games - has revealed that its W3D gaming smartphone will be releasing in the US on September 29.

Snail Games is also keen to assert that it's still a capable - and unlocked - smartphone for everyday use too.

"The W3D smart phone was created to be an industry leading gaming device that includes all the modern features of a smartphone," said Dan Doughty, director of business development at Snail Games USA.

"No other device has the controls and hardware to deliver a revolutionary mobile gaming experience for the core player. The W3D makes all other smartphones look like casual gaming devices."

It's an interesting approach from Snail Games, but one which draws from its experiences in China, where it has launched similar devices (see the video below).

It  was also the Chinese first games company to offer a SIM card.

The W3D is retailing at $399.99 and available to pre-order exclusively through Amazon.

Fox faces $2.5 million lawsuit from Snail Digital over lack of support for War for the Planet of the Apes mobile games