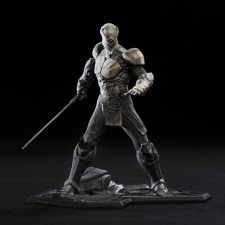 Amazon has a new trick up its sizeable sleeve.

As part of the partnership, Amazon will now print the character you design on-demand and deliver it directly to your door.

Chair Entertainment cut its Infinity Blade deal with Sandboxr in 2014, so we assume this deal is just a continuation of that through Amazon's channels.

Prices start at $30 and skyrocket up to $90, with buyers able to customise everything from the weapon a character holds to the way it stands.

Amazon has been a big supporter of 3D printing technologies, and last year launched its own 3D printing store that enables customers to buy tools including filament, CAD software and other accessories.

"There is a lot of passion and excitement in the culture of gaming, as well as 3D printing, and by combining these two worlds and allowing customers to design and personalize their favorite video game characters we can bring enthusiasts even closer to the games they love," said Steve Johnson, Director for the Amazon Marketplace.

"3D Printed Products on Amazon is still in its early days, and we are eager to offer customers the freedom to be designers and create one-of-a-kind items."

Despite $50 million Crytek deal, Mavens split over whether Amazon has a future in mobile games