Four technologies that will change the aesthetics of game development

Benjamin Sutherland is looking ahead 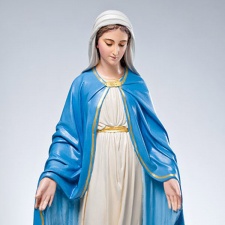 Benjamin Sutherland, co-founder and CEO of Present Creative, is a multimedia artist and designer who's interested in the way expressive mediums and technology intersect and inform one another.

In his talk at Pocket Gamer Connects San Francisco 2015, titled “The New Blue: Staying Ahead of Development Trends,” Sutherland pointed out several examples of when technology has driven aesthetic and design decisions.

He then used these patterns to predict the futures of various technologies.

Sutherland’s prime example came from an unexpected source: why the Virgin Mary is always depicted draped in blue.

Sutherland explains how blue was an expensive pigment 2,000 years ago, making it unlikely that the real historical figure would’ve actually worn it. Blue paint was expensive too, but painters chose to use it in their illustrations of the Virgin Mary to pay homage to the core figure in their work.

Now the blue has become a key part of our perception of the figure herself.

“With every new medium and technology, there’s always a signature look of that technology,” said Sutherland.

With every new medium and technology, there’s always a signature look of that technology.

As for the Virgin Mary example: “The signature of that technology has lasted 2,000 years.”

More modern examples include guitar distortion resulting from the use of amplifiers becoming a key sound in certain styles of music, or physical set and prop design techniques used in films (like the creation of the Star Destroyer) translating into tools in 3D design software years later.

“Drones themselves are going to affect art in the world that we live in,” said Sutherland, outlining a scenario where drone users send the machines out to plan and then spray a graffiti design in hard-to-reach places, like the top of a skyscraper.

User input is also changing with technologies like facial recognition and motion capture. Not only do consumers have new ways to express themselves, but content creators have more options too.

“As it becomes easier to animate a character by acting stuff out, a number of animators are going to be better off being part actor, part animator,” said Sutherland.

Asset stores have been another big game changer. The ease and accessibility offered by asset stores are “massively changing the production flow of design teams,” explained Sutherland.