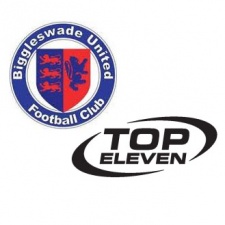 In another interesting football-related move following on from Seriously hook up with Norwich City, Top Eleven developer Nordeus has announced an official tie-up with a professional team.

No, it's not Chelsea, Barcelona or Inter Milan.

Despite Top Eleven's success - it has five million daily active players and claims to be the most played online sports game in the world - it's decide to pay for its logo to be displayed on the shirts of the mighty Biggleswade United.

You're probably thinking Biggleswade who...?

And you be right. The club is in the Spartan South Midlands league, and recently won the North Beds Charity Cup. It's not a giant of the game and won't be in the Premier League any time soon.

Despite this, it's Biggleswade United's focus on community that's attracted Nordeus' attention and money.

Led by chairman Chris Lewis and director of football Guillem Balague, it's attempting to change grassroots football by using the sport as a way of inspiring the local community.

For example, it works closely with local educational and community groups to deliver success both on and off the pitch through its partnerships.

Nordeus' deal isn't just about money either. As part of the deal, it will be supporting a variety of community and charity-led initiatives undertaken, including Football Beyond Borders and England Homeless FA.

"All Top Eleven managers start their careers in grassroots football and must build their club through improvements both on and off the pitch to succeed," commented Nordeus CEO Branko Milutinovic.

"In Biggleswade United, we have found the perfect partner, a club who share our passion for football and community building.

Guillem Balague added: "This much welcomed partnership between us and Top Eleven is proof positive that they share our vision and their backing, and the confidence they have shown in us will provide the boost and inspiration we need to help us move forward and achieve our dreams.