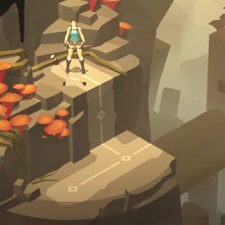 Lara Croft Go has just - well - gone, meaning it’s crunch time for its PR team who are looking to up the ante of the game’s launch.

A slew of Lara Crofts will be sashaying onto the London Underground tomorrow, ducking and diving between the regular commuters in full Tomb Raiding gear.

A different kind of stunt to what Lara's used to

If the commuters have had their coffee, they’ll be switched on enough to know that inside the Metro newspaper lays a secret password. Whisper the word to one of the Laras, and they’ll immediately hand over an iPad mini.

For the uninitiated, Lara Croft Go is a turn-based strategy game not dissimilar to its Hitman Go cousin.

We went hands on with it at this year’s E3, and it was one of the standout games of the show thanks to its ability to keep a classic Tomb Raider flavour peppered with a mobile seasoning.

This particular PR stunt is particularly useful considering that the game is paid, selling for $4.99 or £3.99 on UK App Stores.

Traditionally it’s considered harder to persuade mobile gamers to part with their cash up front, but getting a fully geared up Lara Croft to wave a free iPad under their noses is bound to attract attention.

All we can confirm for now is that there will be “several” Lara Crofts riding the tube networks between 8am and 10.30am tomorrow, and that they will be on the “main commuter routes.”

Read into that what you will – but our money’s on the Central and Northern Lines.

It’s a smart move, and one that is bound to turn heads on social media. As Lara Croft Go rolls out on iOS and Android, targeting the very people who are most likely to game on their way to work is a clever idea.

Let’s just hope that those gamers will swap their smartphones for the Metro tomorrow morning.