Gameband+Minecraft lets you craft on any PC 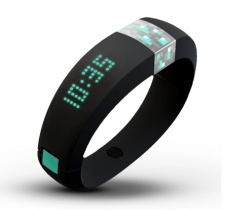 Barcelona-based company Now Computing has announced what it calls "the world's first Minecraft wearable" in the form of Gameband+Minecraft.

Available now, the USB 3.0 stick device has the appearance of a slimline smartwatch but is essentially a solution for those wanting to play a complete version of Minecraft on any computer.

Compatible with Windows, Mac, and Linux, and with speed to facilitate Minecraft gameplay directly off the band itself, the computer in question needn't even have Minecraft installed for it to work.

It also comes pre-loaded with Minecraft maps from Sethbling, Hypixel and Dragnoz, and saves your worlds, also backing them up onto cloud-based servers.

Whether or not the technology behind Gameband is going to be used to support other games is unclear at this point, but there's certainly potential there.

As for its functionality as a watch, the Gameband's LED display can be "hacked" using included software to feature time and calendar functions, as well as animations or pictures - all of which can be shared and exchanged with other users.

Available now in Redstone and Diamond varieties, the Gameband+Minecraft is retailing at $79.99.