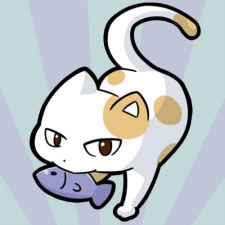 After suffering a heart attack mid-work out, Herdjie Zhou did what most young men would do. He sat at his computer, and made a mobile game about cats gulping airborne fish.

Two months after it launched, Nom Cat had racked up two million downloads – all without a penny spent on user acquisition.

“While we were developing Nom Cat we had to decide how to make the game viral with marketing," said Zhou on stage at Pocket Gamer Connects Helsinki.

"We decided to work with a well-known pixel artist where they drew a cat and cross-promoted our game. Indie communities are such a close knit community; people were willing to help out.”

“We started by approaching the most famous cat owners, but of course they said no because no one knew who we were. Then we managed to get in touch with Venus the Two Face Cat who signed with us.

"Once that was done, it was easier to sign others – though most of the cat owners we signed were in the US which was tricky due to time differences.”

“We also realised there’s a huge structure around those cats. They have managers, lawyers, and protection from making bad business decisions. Eventually we came up with a mutual beneficial agreement.”

Despite organisational difficulties, the work paid off. Having secured the backing of a eight of feline titans with a social media reach of over 5 million, Zhou found out that Apple would feature the game once it launched in May.

The result was that in the first week, Nom Cat scored 800,000 downloads from the feature alone. Now with the help of Nylan and Keyboard Cat that figure’s been boosted to 2.5 million, and Zhou promises an update is on the way.