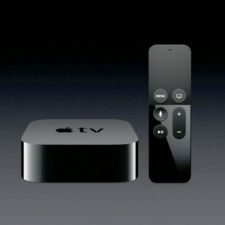 Aiming "to do something about" stagnation in the TV space, Apple has announced the new Apple TV at the live-streamed Apple Special Event.

Stating that "the future of TV is apps," Apple CEO Tim Cook introduced the California firm's manifesto for the future of television in the form of a redesigned set top box, running the 64-bit A8 chip, and remote - equipped with Siri, and a number of TV and film streaming services.

The remote boasts a touch pad for intuitive scrolling as well as a microphone for Siri commands.

As for its gaming capabilities, the new Apple TV's new tvOS boasts Game Center itegration for developers, and is available for developers from today.

There will also be a dedicated App Store for Apple TV, with developers able to create universal apps that span iPhone, iPad and Apple TV.

Linked to this is a Game Center feature that will enable you to start a game on one device and continue it on another device.

A handful of new titles - including more console-style games such as Disney Infinity and Guitar Hero Live - were also announced for Apple TV.

On stage, Australian developer Hipster Whale showed off a version of Crossy Road on Apple TV including a new multiplayer mode, with one player using the remote and other his iPhone.

A gaming-specific controller was also rumoured prior to the event, but nothing of the sort materialised. Instead, the focus was on how seamless it would be to control games using the touchpad, accelerometer and gyroscope-equipped remote.

Guitar Hero Live isn't Harmonix's only experiment with Apple TV, either, with Beat Sports - a kind of musical Wii Sports-esque party game that supports up to 4 players - set to be available on day one.