School of Dragons dev JumpStart on going multiplatform with Unity 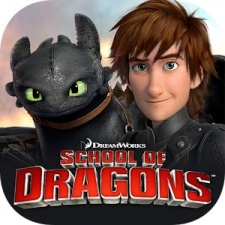 Specialising in MMO games for kids, it is perhaps no surprise that Dreamworks approached JumpStart to create a new MMORPG based on its How To Train Your Dragon franchise.

The result was School of Dragons, which was released online and on Facebook in 2013 and allowed players to create and raise a dragon of their own to explore the virtual world with.

The idea was to go multiplatform though, so in December 2013 the game launched on iOS and was swiftly followed in 2014 by Android and Steam.

All the eggs, all the baskets

Part of the reason to go multiplatform, according to JumpStart's director of application programming Rob Baily, was to capture a broad market.

"One platform can't rule them all," he explained on stage at Unite 2015 Boston.

"In North America and Austrailia our online version of the game does better, in Asia our mobile does better."

However, getting to this point where they are able to do this was a slog. The company's creative director Chris Williams said that "When we first started in 2008 with our JumpStart title on Unity 2.1 the only thing available was OnGUI.

"For School of Dragons we had to switch to NGUI for mobile. In 2008 our MMO server was Smartfox 1.x which gave us the best outof the box thing at the time. Today we're just using Smartfox 2.x. Then when we started there wasn't anything really called a plugin, now we use Prime31, Unibill, Tapjoy and Facebook."

A key part of being able to go multiplatform was learning to optimize the game for low-end devices and smartphones.

Art is always the first target when something goes wrong.

Whereas "hundreds of thousands" of polygons created the PC versions of characters, for mobile this had to be simplified to around 250.

Time to get arty with art

"Art is always the first target when something goes wrong initially," laments Williams.

"You've got low memory, or things are crashing, and the programmers always look at us like it's our fault. So we put together a load of budgets to sort this out - looking at build for the best quality, combination textures, optimisation labels for the artists to use, occlusion culling and more."

Indeed, he says that "you want to make sure it's the same experience whether you're on iPad 2 or on Steam," so his team tried tactics like having the same amount of LoDs for each object across the entire project, reducing size and granularity, and making subtle changes like removing splash effects on waterfalls in the mobile version.

"School of Dragons now runs across ten different platforms," says Baily, and its userbase is in a phase of steady growth.

Unite 2015 Boston kicks off at 10am EST, and you can watch it live here