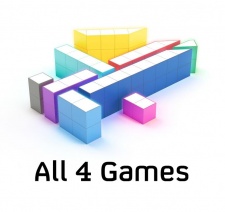 British TV broadcaster Channel 4 has announced that it has set up a Glasgow-based mobile games publishing team called All 4 Games.

Announced at the annual Eurogamer-hosted EGX event in Birmingham, All 4 Games will aim to provide assistance to indie developers with its gaming expertise and the marketing power that comes with being part of a major broadcasting company.

Colin MacDonald, Channel 4's Games Commissioning Editor since 2012, takes the helm. And he's assembled quite the enviable team, too.

With Tone Brennan joining from Outplay Entertainment as Executive Producer, Neil McPhillips jumping ship from Sony to take the Producer role, and Ami Langton swapping Liverpool for Glasgow as she leaves Ripstone to become PR & Marketing Manager, All 4 Games seems ready to take on the competition.

All 4 Games will offer its services to developers from advisory feedback in the early stages to QA testing and marketing later down the line.

And as you'd expect, it's in marketing that developers can truly benefit from the multifaceted nature of Channel 4's business, with plenty of cross promotion opportunities across its digital and social media platforms.

We’re confident the All 4 Games label and the breadth of our team’s experience will help devs launch commercially successful games.

“Having got a truly first rate team in place, we can’t wait to get out there working with games developers to help them take full advantage of the explosive growth of mobile games but at the same time ensuring they are fairly rewarded and retain their IP," says MacDonald.

"By offering developers unique commercial terms and the opportunity to partner with a trusted media brand, we’re confident that the All 4 Games label and the breadth of our team’s experience will help developers launch commercially successful games that win awards.”

Channel 4 already gives fully-funded commissions to mobile game studios in association with its flagship brands - such as The Snowman, Made in Chelsea, and Hollyoaks - but the All 4 Games label will support both Channel 4-funded titles and those from third-party developers.

For developers wanting the opportunity to meet with the All 4 Games team, it will be touring the UK's towns and cities - particularly those with real gaming pedigree such as Guildford and Leamington Spa - between October and November.

The full list of dates and locations is here.

For more information about All 4 Games, you can visit its freshly-designed website here.