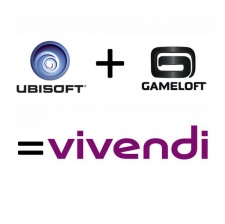 This means it's now the fourth largest shareholder in Gameloft.

It continues to have a 5.7% shareholding in Activision Blizzard, a company that was formed when the Vivendi-owned Blizzard was merged with Activision.

However, over the years, there have been rumours that Ubisoft and Gameloft could or should be merged.

On one level, this makes sense as Gameloft is wholly focused on mobile games; a sector in which Ubisoft has little involvement.

Vivendi is now the fourth largest shareholder in Gameloft.

An obstacle is that both companies are run and partly owned by members of the Guillemot family, making an external - and unwanted - bid much harder to accomplish.

There are also strong cultural differences between the companies, with Ubisoft focused on self-generated IP with its development talent in the US and Europe.

Gameloft has generally been more focused on licences and copycat IP, with much of its development in cheaper emerging markets such as India and China.

If Vivendi wanted to force through a merger, however, it could find some support amongst Gameloft shareholders.

On the back of weak performance in 2014 and 2015, the company recently posted a half year loss, which has led to a wider restructuring and the closure of seven development studios.

Ubisoft is in much better financial shape, and as the larger and more successful of the two companies, its shareholders would be the key to any merger plan.