Last event of the year 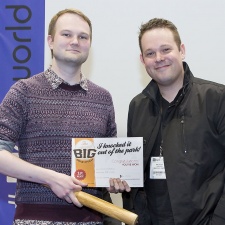 Finishing a year in which the Big Indie Pitch has travelled to San Francisco, Montreal, Cologne and Bangalore (amongst others), we ended our year back in London.

Held as part of Apps World Europe 2015, our last Big Indie Pitch of 2015 was another high quality affair.

Including indie superstar judges such as Jon Hare and Mike Bithell, not to mention journalists from Vice, Destructoid, Pocket Gamer, 148Apps and AppSpy, 19 teams of hopefuls entered.

Each had 4 minutes to pitch their game to the judges, who played the game, providing immediate feedback as well as creating opportunities for future communications.

But when it comes to the reckoning, there can be only one three winners.

It's due to be released for iOS and Android in March 2016.

In second place was Cobe The Gallery from Grzegorz Reglinski.

You can get the F2P peaceful puzzle from the App Store now.

And the winner was Launchasarus from brother indies SFB Games.

In it you dig up dinosaur bones and launch them into another dimension. Launchasarus is "coming soon".

Thanks to all the judges and teams who attended. And remember, we'll be kicking off 2016 with the Very Big Indie Pitch at Pocket Gamer Connects 2016.

As part of the deal, short-listed developers will get two tickets to Pocket Gamer Connects 2016.