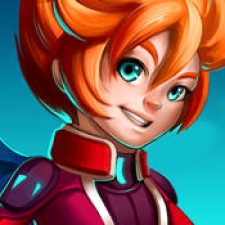 Hi-Rez Studios, the US-based developer best known for the PC MOBA Smite, has released its first ever mobile game in the form of competitive auto-runner Jetpack Fighter.

Hi-Rez is attempting to tempt its established (and sizeable) Smite player base to download its mobile offering by granting those who link up their account the chance to play as Smite goddess Nemesis - while the hero of Jetpack Fighter, Leona, will be playable in Smite.

An up-and-coming eSport often mentioned in the same breath as League of Legends and DotA 2, with multi-million dollar tournament prizes not uncommon, Smite has proven Hi-Rez Studios' considerable expertise in the competitive gaming sector.

Indeed, at Develop:Brighton 2015, co-founder and COO Todd Harris ran down 8 things studios need to do to become successful eSports developers - lessons worth noting in the mobile space especially, as those targeting eSports continue to struggle for traction.

Jetpack Fighter's core competitive element comes in the form of time trials, and Hi-Rez has been clear that it "plans to position and support Jetpack Fighter as an emerging eSport in the mobile games space."

Whether it can buck the tend remains to be seen, but with Clash Royale also on the way, perhaps 2016 is set to be the year of mobile eSports.