Ian Livingstone on the past, present and future of the British games industry 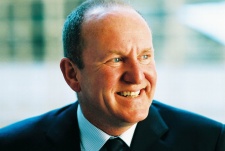 There's no better introduction to the Best of British track at Pocket Gamer Connects London than Ian Livingstone.

The games industry veteran has become something of a figurehead for the UK games industry since co-founding Games Workshop in 1975, and is a big supporter of policies such as tax relief for game developers.

"We are a nation of creativity - look at our art, our fashion, our achitecture - and we have that magic for creating games that the rest of the world want to play," he says.

Livingstone begins by showing a video montage of UK-created games, including Rockstar North's Grand Theft Auto V and Media Molecule's LittleBigPlanet, before pointng to mobile and VR as the platforms that offer the most opportunity for innovation in the coming years.

He refers to 1,902 UK games studios, and counting, with a legacy of seminal games such as Tomb Raider and Grand Theft Auto - "the largest entertainment franchise in any medium" - coming from these shores.

However, for such success stories to exist, developers have to maintain control of their IP - something Livingstone cares passionately about.

"Often, the case in the UK is that studios have to do a lot of work-for-hire and trade off their IP to finance projects and it's such a shame," he says.

"You build real value in your company with your own IP."

As for mobile, he notes that this faith in quality isn't always the answer - aggressive UA "often results in the best games being kept out of the top 10," he notes, with Crossy Road and Flappy Bird-style overnight successes "a minority."