Why Rival Kingdoms and Samurai Siege are considered passion projects 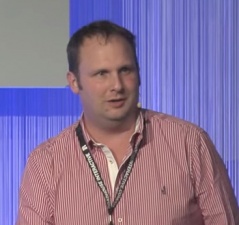 And indeed, with the young London studio having already launched two successful mobile strategy games in Samurai Siege and Rival Kingdoms, it does feel as though it is yet to receive its due recognition.

In a short talk, Hade's main focus is to provide an insight into Space Ape and what drives its development.

He begins by explaining the counter-intuitive manner in which the company began: attempting to make a sports game, staffed almost entirely by those who had no interest in sport.

From here the Space Ape mantra of "making games we ourselves want to play" arises, with the sports game abandoned and a prototyping exercise resulting in the Clans-esque Samurai Siege as the most popular option to pursue.

"Productivity [on Samurai Siege] was insane, the quickest I've ever seen," says Hade, explaining the noticeable change in attitude and results that occurred when the firm shifted gears.

"We now make sure that everyone on the team loves the game as a player."

Samurai Siege was in beta within six months, with Hade noting the massive importance of the project in "getting us to first base as a business."

Indeed, Space Ape's second game Rival Kingdoms was very much built on the same foundations. However, there's another lesson to be learnt from its missteps.

Hade and his team quickly learned that the "make what you love" mantra comes with one large caveat: ensure a sizeable audience shares your tastes.

"We went too dark and too core [with Rival Kingdoms]... when we launched the game, what held it back was the marketing."

Statistics showed that only 5% of players would go on to install the game after spending time on the app store landing page, compared to 15% on Samurai Siege - the presentation was simply intmidating people.