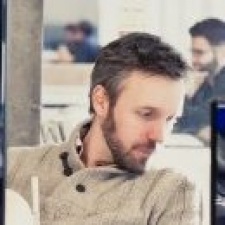 Head of Studio at Square Enix Montreal, Patrick Naud, began his career in the mobile industry with an "idealist approach to making mobile games."

Having come from a console game background, Naud suggests that he and many of his colleagues rather underestimated the task they were undertaking when establishing the mobile-focused Montreal studio.

"Mobile should be a breeze," he quips."We just need to not be evil and we'll be fine, right?"

However, while a number of successful mobile developers cut their teeth on console and PC, Naud suggests that it's far from a straightforward transition.

In console, it's often a case of more means better: "we come from the backround of gazillion million people working on making the biggest game on the market... many developers couldn't adapt to the exotic world of mobile."

Of the original Square Enix Montreal lineup, only six remain. The rest have all returned to console development in some form - "all great developers, but they didn't quite fit with what we wanted to do."

Crystallising the difficulty of adapting to the mobile marketplace is Square Enix Montreal's chequered history of free-to-play implementation, with Hitman Sniper being developed alongside Hitman GO as an F2P title, undergoing two soft launches, before switching gears to premium.

Indeed, premium has been the firm's go-to approach, courting mainstream attention with the combination of quality and well-known IP.

This has resulted in its games being featured on the App Store, too, resulting in an incredible number of interactions on the storefront: 11,000,000 for Lara Croft GO and 7,500,000 for Hitman Sniper.

However, Naud highlights that the audience remains very different - people often don't convert from triple-A brands to a mobile game, even if it's a brand they love.

All change, then. But in spite of this, Naud describes Square Enix Montreal as a "heavily profitable" arm of the business.

His key message? "It's possible to bring great console brands to mobile, it's possible to make money from premium - it's not easy, and maybe I've romanticised it, but it is possible."