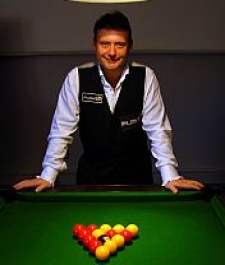 March 28th, 2008 - 02:05pm
By Rob Hearn, Managing Editor
The world of mobile snooker is dominated by two big players. In one corner, to borrow a metaphor from another sport, there's I-play's World Snooker Championship, and in the other there's Player One's Ronnie O'Sullivan franchise, and every year both of them cruise unchallenged to the genre's grand finals.

Never one to miss a trick-shot, mobile giant Gameloft, with the endorsement of the estimable 'people's favourite' Jimmy White, is entering the arena to see if it can shake things up.

True to its mascot, Jimmy White Snooker Legend looks to have plenty of character. There are five different snooker halls to visit, in locations as diverse and China and London, and you're able to customise your clothes, the baize, and even your cue.

It seems as though it's a top-down affair, viewed with a dynamic camera that zooms in and out. Gameloft also promises realistic ball physics, faithful models of the ten players on offer, and heaps of atmosphere.

Gameloft has a stiff fight on its hands if it hopes to secure the mobile snooker trophy, given the long hours Player One and I-play have put in on the practice table, but we wouldn't put it past the French behemoth to give Jimmy a bit of long overdue glory.

Click 'Track it!' to see where the story goes.