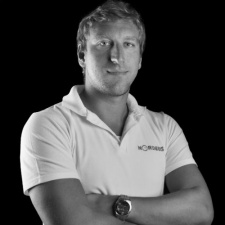 Nordeus is at an interesting point in its life right now, as it hires top talent across its worldwide studios and looks to diversify from its one big game: Top Eleven.

"It's basically the only fuel we've got, which is not so great. What is good is that it's powerful fuel... it allows us to think long-term and plan ahead," considers Milutinovic.

"The reason we haven't got another game live is complicated - we are inexperienced, we are incompetent in certain ways... what we've been trying to do is learn, and to build the services we need."

Indeed, the delay certainly isn't due to apathy on Nordeus' part. Rather, the 'difficult second album' stage weighing heavy, it's at pains to get it right.

"Top Eleven has 140 million players worldwide, so the bar was set high. Nothing was even close to meeting it... but all the data says that we will launch our second game, and people will be surprised when they see what it is - particularly with the triple-A graphics quality," he says.

With Reboot being based in Split, Croatia, talk soon turns to Eastern European game development.

The Serbia-based Nordeus is a success story for the region, but can it be replicated?

When we started, there was nothing. A few pioneers here and there, but mostly nothing.

"When we started, there was nothing. A few pioneers here and there, but mostly nothing," recalls Milutinovic.

"[But] across the world, and especially in Eastern Europe, enterpreneurship is becoming normal. All you need is a computer, and anyone can afford it."

The industry is still not at the level Milutinovic would like, however, and he intends to try and remedy this.

"We're extremely driven by our impact on the community," he says.

"Over the next ten years, I would personally be disappointed if we didn't leverage our position and help others to level up significantly."

But this opens up "a universe of effort," he adds, which is "very difficult to devote" under the current company structure.

In the future, he suggests, Nordeus could adopt a scheme whereby "some percentage of the employee base divert a little from what they do [internally] and do some community work."

"There's substantial potential, but it's locked. The quesion is how much of that potential we're going to unlock. Hopefully, all of it."

Another way in which Nordeus is helping the Eastern European industry is by tempting top overseas talent to the region and encouraging them to stay put.

You get authority, and that's addictive. Why would you leave?.

"There's no strict management, and I think we're really good at empowering - even when people are scared of being empowered, we still do that," he says.

"You get authority in whatever you want, and that's addictive. Why would you leave?"

With 160 employees, a powerful fuel in Top Eleven, and a thriving company culture, it's a good time for Nordeus despite the weight of expectation on its next release.

So, when can we expect to see it?