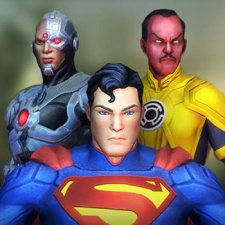 Skill trees are still intact however, allowing players to level up their heroes and unlock new abilities as they see fit.

Campaign missions have also been simplified.

Instead of three difficulty levels, there are now just two, Normal and Hard, the latter of which is used primarily to earn Hero Fragments.

It's a fairly substantial change, and it brings the game more in line with another popular card-collection battler – EA's Star Wars: Galaxy of Heroes.

The progression system in particular is incredibly similar in design and execution, aside from DC Comics Legends' skill tree system, while the new mission and reward structure is practically identical.

Interestingly, the original design of DC Comics Legends also happens to be similar to a more recent battler, Disney's Marvel Avengers Alliance 2, a game which failed to capture an audience.

While that may have been due to a lack of an auto-play feature – something DC Comics Legends does have – there are other gameplay features that made Avengers Alliance 2 a less enjoyable experience than Galaxy of Heroes.

So it's likely that the additional time in soft launch has been spent keeping an eye on the marketplace and seeing what gameplay trends are working well, so as to ensure DC Comics Legends has a smoother launch than its Marvel competitor.