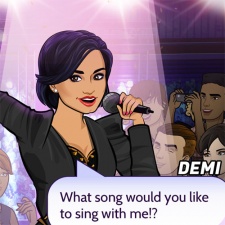 Pocket Gems has revealed that its celebrity-branded interactive story game, Demi Lovato: Path to Fame, has earned $13 million since it lauched in August 2015.

The story has also had its episodes viewed 225 million views from 20 million unique viewers across its two seasons.

It's proof that the decision to focus on celebrity licenses has paid off for Pocket Gems, which also picked up the Mean Girls licence to promote its main Episode app.

As well as the celebrity-focused content, Episode also encourages users to write their own stories.

You can read our indepth Making Of article about the game - Demi Lovato, Mean Girls and moderation: The making of Episode.