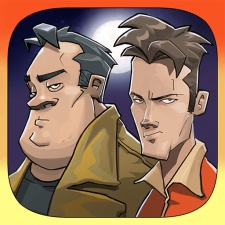 When developing Dog Mendonça & Pizzaboy, most team members an the team had never developed a game before.

A six-person team brimming with art and animation expertise, but little in the way of game development experience, it set out to develop a classic-style graphic adventure game in 2012.

When OKAM Studios Co-Founder Ariel Manzur takes the stage at Respawn Gathering of Game Developers in Cologne, he's first keen to establish what Escoria is not.

"This is not a product like Adventure Game Studio," he says. "It's a tool to make this game."

"It's not one of these solutons to make a game without programming, but it doesn't require a heavy involvement of programming either."

The central concept behind the framework is to allow team members - particularly game designers and artists - to play to their own strengths, without the need for constant assistance in implementation from a programmer.

"Having good tools allows for specialisation... you break away from the bad habit that we have of giving everything to the programmers," explains Manzur.

"Many studios do this - the programmers are the babysitters of all the assets in your game."

Escoria has its own, simple language called esc, which allows the creation of complex dialogue trees and the like with a simple logic - but without the complexity of traditional coding languages.

The thinking behind this is that if script becomes too complex, it will inevitably develop bugs that designers will be ill-equipped to resolve - thus facilitating the involvement of a programmer and defeating the object.

"We want to give this to people who can write good dialogue, and design fun puzzles, but are not programmers," he says.

"It's our responsibility to give them something they can learn."

There's a comparison to painting that Manzur uses throughout, to highlight what he sees as Escoria's key function.

It's our responsibility to give designers and artists something they can learn.

"Imagine you want a mural painted on a wall, and you hire an oil painter who works on canvas - and then a wall painter to copy that art," he muses.

The implication is that running everything through a programmer is just as counter-intuitive as this convoluted scenario. But what happens when you cut out the middleman?

"The product is going to be closer to what the artist imagined," comments Manzur. "This makes the people happier and, I think, better products."

Manzur makes no claims that Escoria is a slick, user-friendly interface.

He's very clear that there's a definite learning curve and that "we don't care if the UI is pretty unless it interferes with productivity."

But once it's been learned, he is confident that the development of graphic adventure games can be greatly simplified for all team members.

You can find more information about the free, open-source Godot Engine here.

Okam Studio on its plans for cult comic Dog Mendonca, and the potential of the Latin America market