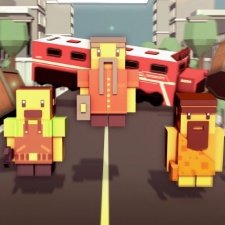 The endless runner tasks players with jumping over hazardous objects to keep their crew alive for as long as they can. It’s Art Dynasty’s first step into the casual mobile games market.

The deal also marks the second time a game will have been published under the Vivid Games Publishing brand this year.

Vivid plans to launch Invictus Games’ Prime Time Rush, its own IP Metal Fist: Urban Domination and other unannounced titles by the end of 2017.

“We constantly observe and analyse the mobile games market and we can see how important it is for a game to have an interesting concept," said Vivid Games CEO Remi Koscielny.

"You can be successful both with a robust, complex title for core gamers and also with a compelling, smaller title which appeals to a wide audience. Road Survivor is the first casual game in our publishing portfolio, making it even more diverse.”

Vivid has previously worked on titles such as Heroes of Nox: Galactic Clash and Real Boxing 2 Rocky.