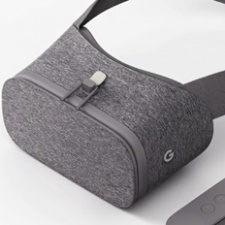 Google has revealed a new Google Daydream VR headset called Daydream View as it expands its presence in the competitive virtual reality market.

The headset works with a Google Daydream-ready smartphone inside. The first compatible Daydream phone is the Google Pixel.

Rather than having a hard outercasing, the headset uses fabrics making it more akin to clothing that typical hardware.

The headset comes with a single motion controller that can be used to interact with the virtual world. The hardware also supports head tracking.

The first games to be released for Google Daydream include Warner Bros-published title based on Fantastic Beasts and Where to Find Them and CCP's Gunjack 2.

50 companies are set to bring apps and games to Google Daydream VR before the end of the year.

Google Daydream will be released in November and will cost $79.

It's not yet clear exactly which other Android phones will be compatible with Google Daydream. Previously announced partners included: HTC, Samsung, LG, Xiaomi, Huawei, ZTE, Asus and Alcatel.