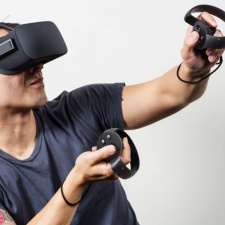 Oculus has opened pre-orders for its long-awaited Oculus Touch controllers which will begin shipping on December 6th.

The controllers will retail at $199. Customers get two Touch controllers, an additional sensor, a Rock Band VR connector and two games: The Unspoken by Insomniac and VR Sports Challenge by Sanzaru.

35 games will be available when the Oculus Touch launches, including Harmonix's aforementioned Rock Band VR and Croteam's Serious Sam VR: The Last Hope.

Every sense but smell and taste

The new controllers allow players to use their hands to control the games, allowing for better immersion than the pre-packaged Xbox One controller.

Oculus has also opened pre-orders for its new headphones, retailing at $49 a pair. Orders for additional sensors have also opened to allow Oculus users to support larger room-scale configurations.

The Oculus Touch release date was revealed at Oculus Connect 3, where the company also revealed it had been working on a standalone HMD.

You can keep up with all the latest VR news over at our newly launched website, The Virtual Report.biz

For more VR, AR and MR news, check out our new website The Virtual Report.